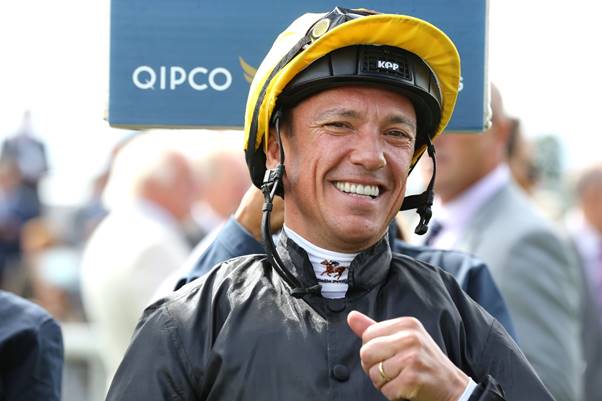 What does a below standard Royal Ascot mean for the future of Frankie Dettori?

There aren’t too many jockeys in horse racing more highly lauded than Frankie Dettori. The Italian’s three-decade long career as one of the UK & Ireland’s most successful riders in the sport is largely unmatched by his peers. His tenure at the top was recognised earlier this year as he was inducted into the QIPCO Hall of Fame – making him just the third jockey to be awarded the honour.

However, in spite of a resume which includes being crowned Champion Jockey three times, there were fresh concerns over what is next for Dettori after a dismal outing at Royal Ascot last month. Dettori’s rides on bet horse racing pre-race hopeful Lord North in the Prince of Wales’s Stakes, Stradivarius in the Gold Cup and Saga in the Britannia were relatively poor compared to what we have come to expect from the Hall of Fame jockey - ultimately leading to a very public and acrimonious split with trainers John and Thady Gosden.

The Gosdens and Dettori have experienced incredible success during their numerous years together, yet both parties vowed to move in a different direction in the aftermath of their unsuccessful campaign at the UK’s premier flat-racing festival.

“Following speculation in the press, Frankie and I have amicably decided to take a sabbatical from the jockey-trainer relationship but we remain the closest of friends and colleagues,” John Gosden said in a statement.

“Frankie is the most superb international jockey and, together, we have achieved significant successes at various times over the last three decades with a number of horses including, most recently, Golden Horn, Enable, Palace Pier, Too Darn Hot and Stradivarius.”

The time apart for the pairing remained short-lived however, with Gosden appointing Dettori to ride Mighty Ulysses in the Sir Henry Cecil Stakes at Newmarket in July. It proved to be a masterstroke as Mighty Ulysses stormed home to take out the Class 1 fixture in impressive fashion ahead of a fast-finishing Alflaila and the always-threatening Berkshire Shadow.

Dettori was incredibly pleased with the win and aims not to dwell on the controversy surrounding him over the last month.

“What is past is past and I am glad I had a winner on my first ride back with him,” he said.

“It would have been a shame to end it like that. I have known John for 30 years and will be forever grateful for what he has done for me. I didn’t want to hold grudges – it’s about going forward.”

While Dettori’s win at Newmarket would have certainly provided him with a much-needed confidence boost, he was unable to repeat his efforts the following day when riding Inspiral in the Falmouth Stakes. Gosden’s filly entered the race as the odds-on favourite off the back of her win at Royal Ascot, only to go down in a shock defeat to rank outsider Prosperous Voyage. The result was a telling blow to the camp – however, it appeared as though John Gosden had fewer misgivings with Dettori’s performances this time around, opting to focus on Inspiral’s schedule rather than his jockey’s performance.

“She hadn’t run all year before Ascot and she’s run a little flat here, but that can happen from Royal Ascot to the July meeting, particularly when she hadn’t run before Ascot since the previous October,” Gosden said.

“The ground was probably quick enough for her but we’ll freshen her up and go again.”

It’s apparent that Gosden has a renewed confidence in Dettori since their break, so much so that he appointed the 51-year-old to ride Emily UpJohn in the Juddmonte Irish Oaks.

If Dettori can perform well in his upcoming races and secure some more high-profile wins in 2022 – it will go a long way towards squashing any debate around his current standing as one of the elite jockeys in racing.

The next few months could prove crucial for the future of the Italian in the sport, and if there is one person you would be foolish to write off – it’s Frankie Dettori.