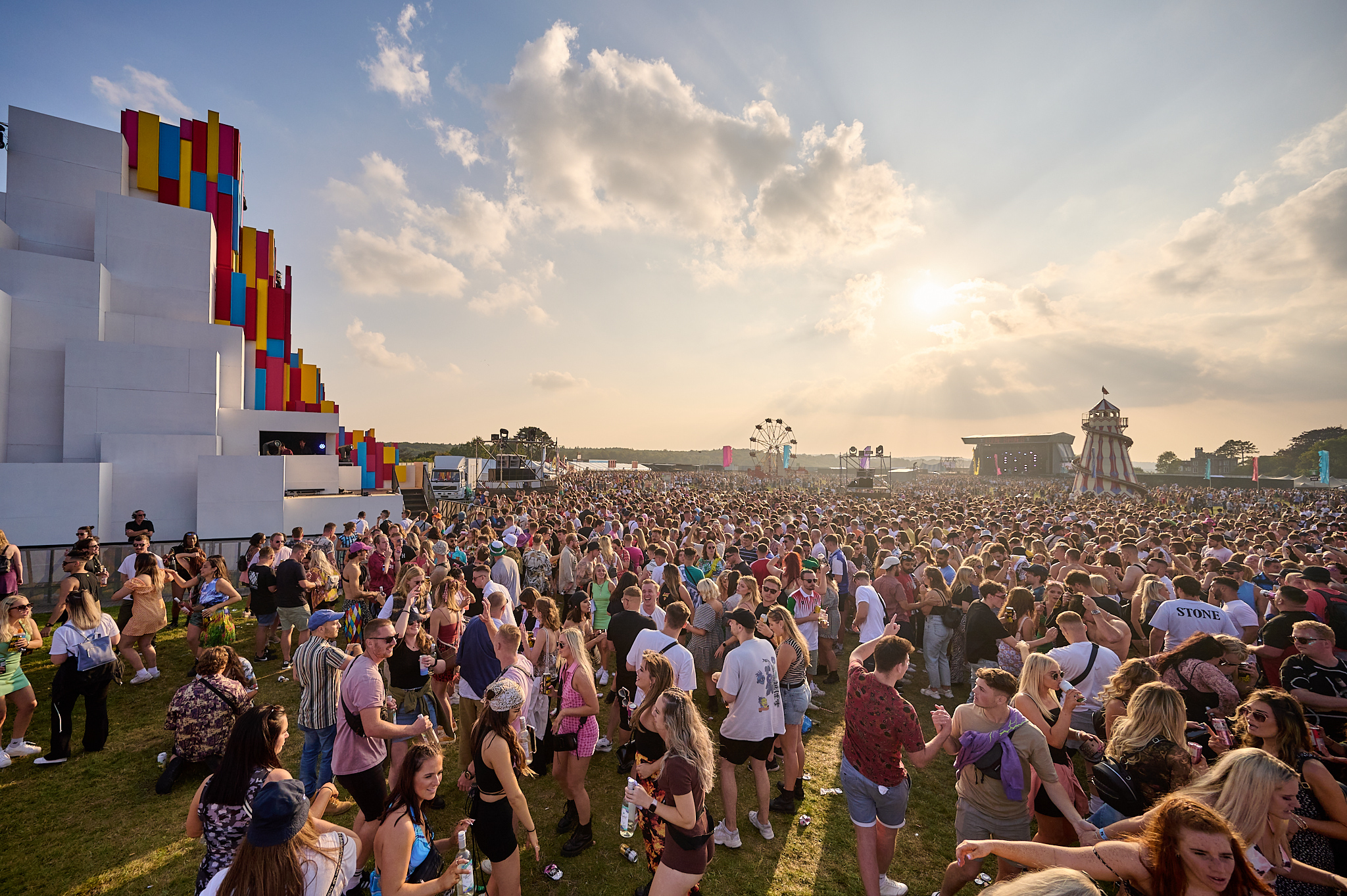 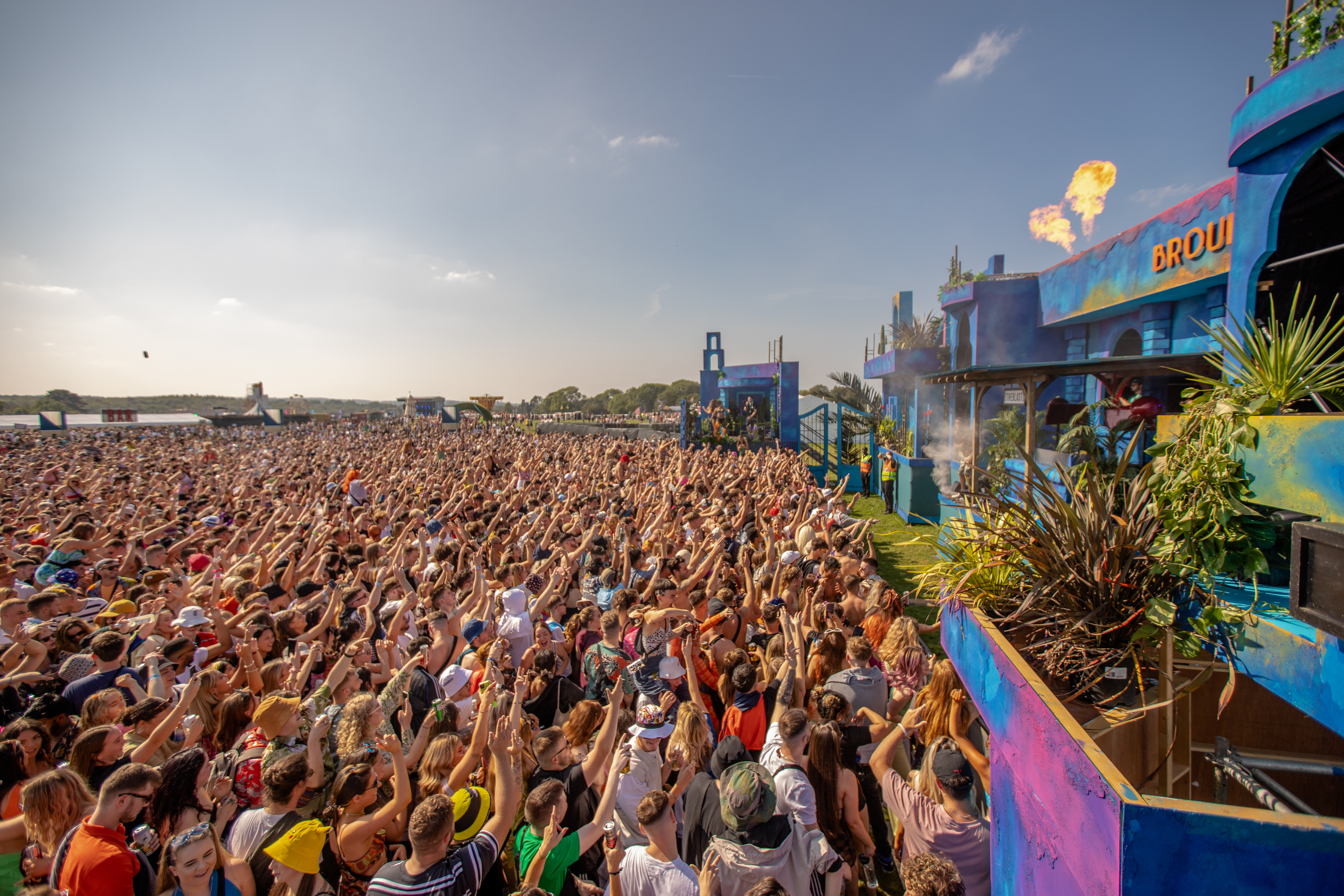 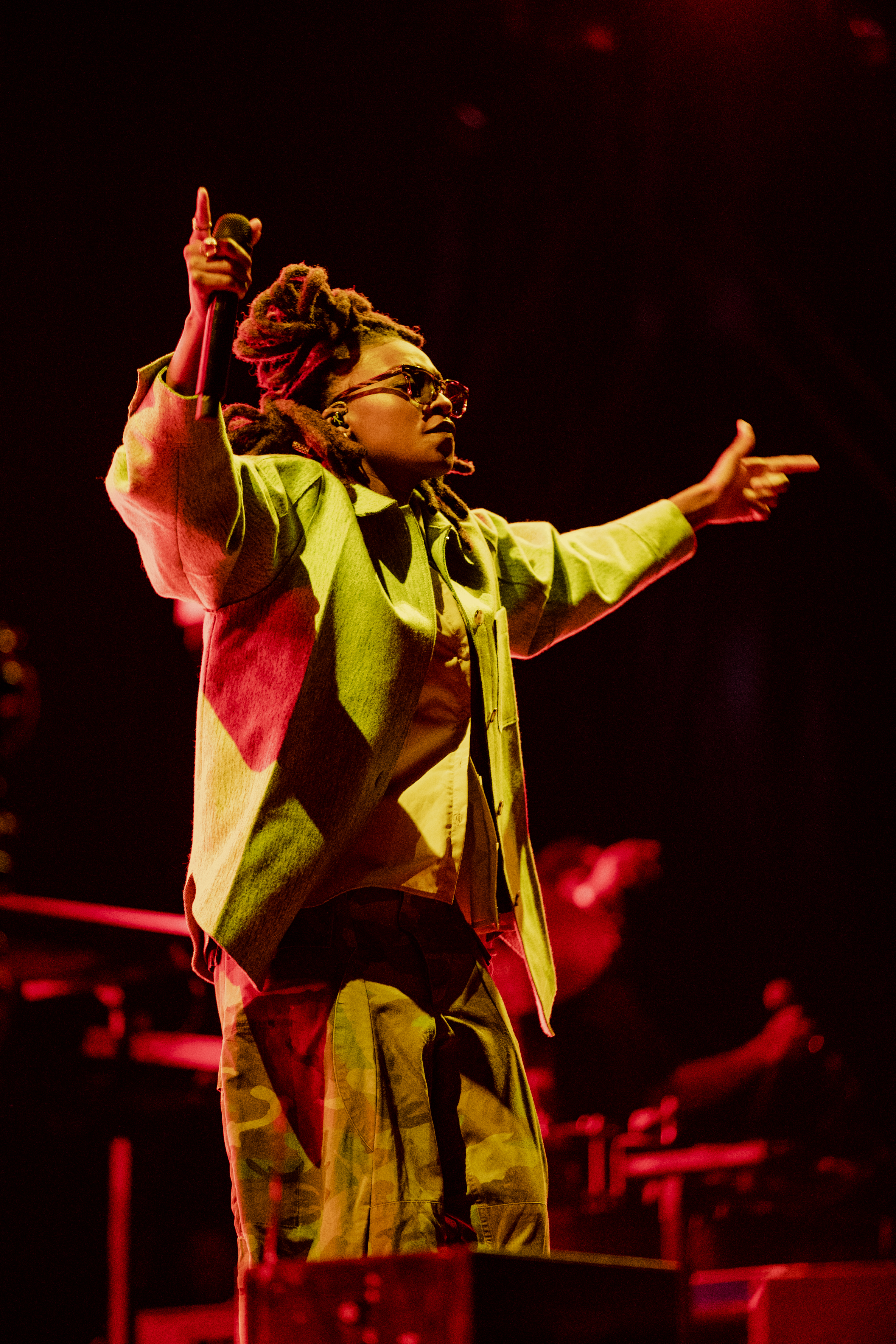 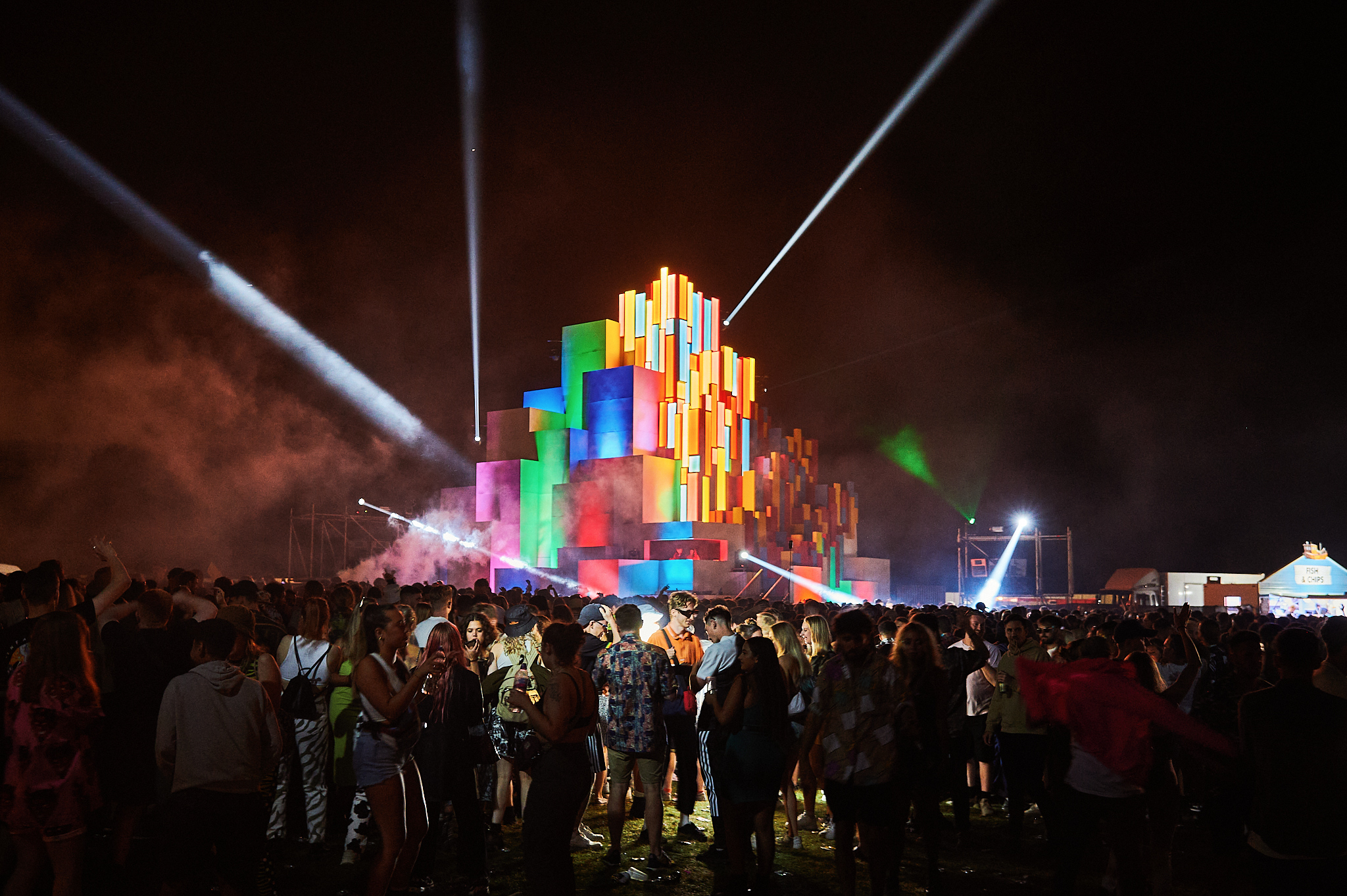 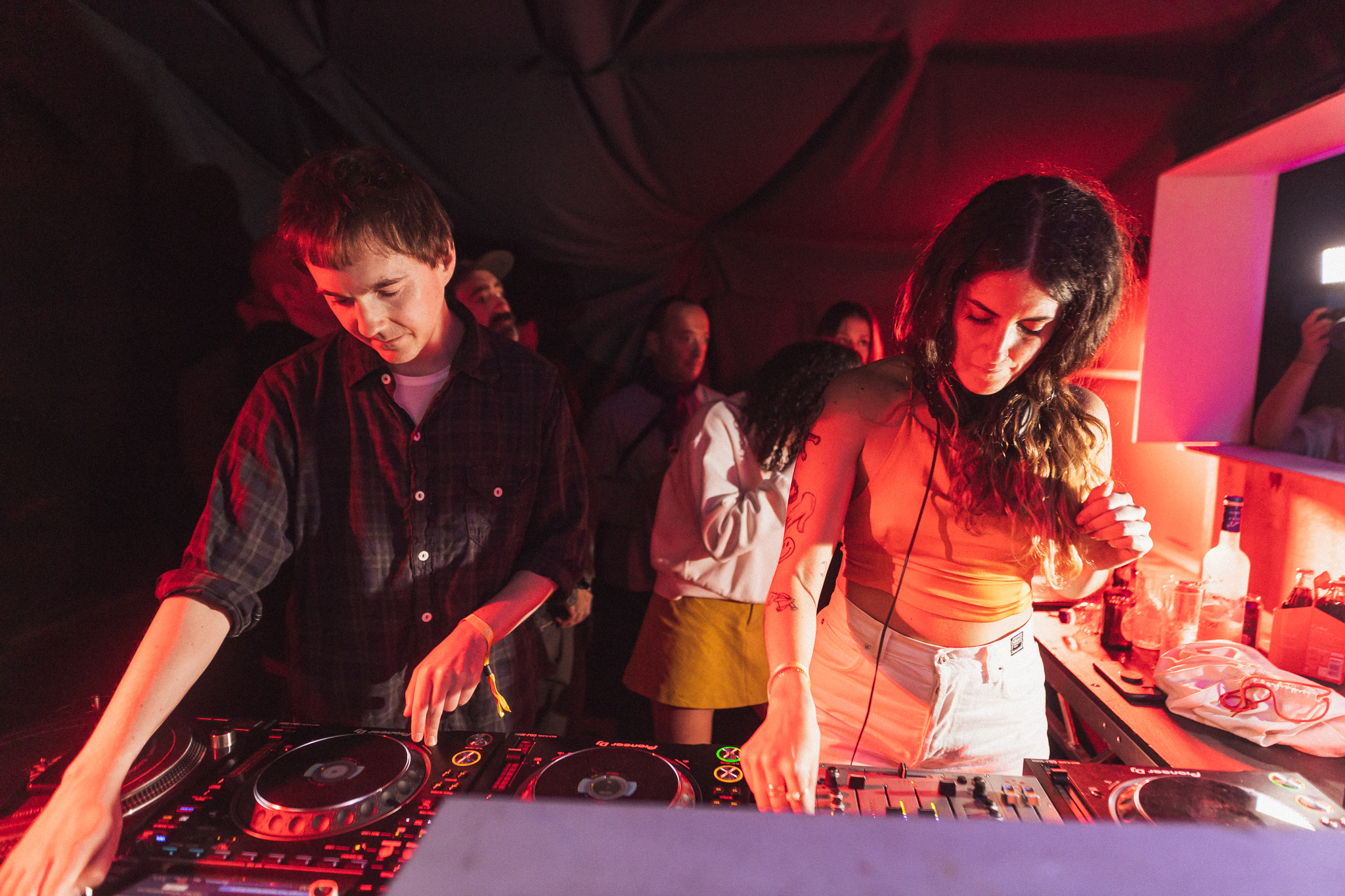 Bristol’s biggest and most iconic music festival Love Saves The Day made its return; despite the issues the pandemic has presented to the events industry. With a huge line-up roster and attendances around the 20k mark each day, Team Love and everyone involved put on quite a show. Swarms of people with smiling faces, coupled with amazing set design and brilliant soundtrack from the artists involved, provided a much-needed release for many people who haven’t experienced a festival in some time.

The festival ran across both days of the weekend of the 4th, as well as a special smaller IDLES event kicking off just before on the Friday. I visited on the Saturday, very keen to see the headliner DJ set with two staples of the underground music scene going back-to-back, Ben UFO, and Bristol’s own Shanti Celeste.

I had the pleasure of visiting the festival site while still setting up on the Wednesday, thanks to the brand new Elevate Us event series, working in conjunction with Big Team (initiative of Team Love) and You Produce to bring networking opportunities to young people interested in the arts. It helped to give me an insight into the passion and sheer effort that goes into setting up a festival, often overlooked by the festival goers. The staff and crew work alongside freelancers in various industries to find the balance between artistic vision and physical practicality when it comes to creating unique stages. As well as all the hundreds of other people who work in every aspect of the festival setting. Their usual home has always been Eastville Park, so rearranging the layout in a new location was another challenge.

I’m sure everyone was as pleased as I was when I arrived to Clifton Downs, blessed with sunshine and no wind, setting up the perfect weather for a day long party on the field. Slightly flexing my insider knowledge from Wednesday, I toured around the festival checking out the stages, now decorated and blaring out the sounds of the musicians and DJs. In true Bristol style, the line-up had a rich diversity of genres and artists, with 6 stages playing everything from Dub to Drum and Bass, House and Techno, to Rap and RnB among the many beautifully designed stages dotted around. When speaking to the festival co-founders, Dave Harvey and Tom Paine, they mentioned that they try and find a nice balance of long in the game legends, well established musicians, and up and coming stars to keep things great in quality, and fresh and exciting.

Starting off with Shy FX playing jungle to the crowds of keen ravers at Brouhaha, I then wandered off to the Lost Gardens, which could’ve taken the spot of my new favourite stage. Alongside Brouhaha, it was covered in a forest of fake and real plants alike. But the finishing touch was the huge flowers with spinning disco balls in the centre, glittering in the sunshine alongside some heavy garage beats from often seen names locally like Dr Dubplate and Emmy. As the day slowly turned to night I spent my time moving between stages, very much enjoying the gut punching sub bass from the dub and reggae coming from the Teachings in Dub stage, with the speaker setup from Firmly Rooted Soundsystem. The Main stage this year was almost ridiculously large in comparison to the other stages, featuring a huge platform for the artists to perform on backed with a massive speaker setup to get the sound reaching all the way to the back of the crowd. I saw Little Simz steal everyone’s attention, rapping and freestyling over her live band’s renditions of her music.

Finally, the time had arrived for my personal highlight at the favourite and most iconic stage of the festival, the Centre Stage which was hosted by Love International, a sub sect of the larger Team Love who run both festivals among other projects throughout the year. Layers of white geometric shapes interlaced with rainbow panels, had now began to glow and evolve as the light show came on to keep everyone’s eyes entertained while the legends Ben UFO B2B Shanti Celeste kept our ears (and mine in particular) very happy. The sound team had outdone themselves, with a 360-degree sound field keeping the music quality perfect wherever you set up. I spent the rest of the festival pretty much in the same spot, dancing away to the stunning selection of electronic tunes, seeing Shanti’s hair occasionally bop around as those two were clearing enjoying themselves as much as the crowd was.

The music and lights stopped, floodlights came on to light out way home and the crowd made their way back home, or to many of the afterparties that would still be going on into the long hours of the night. I had a wonderful time and was very happy to be able to enjoy a staple of the Bristolian culture, having fun and listening to music. So much love and respect to everyone involved with setting up the festival, as well as the amazing line-up of artists who played across the weekend.

To finish off, here are some words about the festival before and after, from the co-founders who we can thank for coming up with the idea that Love Saves The Day.

Dave Harvey: “It feels pretty surreal to be gearing up to finally get back in a field after the crippling uncertainty of the last 18 months. We are beyond excited to get back to what we love doing best with a really exciting line up, focussed on the wealth of amazing UK talent (for obvious reasons), with a heavy Bristol focus this year, which is something we only want to develop further. The line-up really shows the wealth of talent the country’s got to offer right now.”

Tom Paine: “Wow.  We've had such an amazing and rejuvenating weekend on the Downs with the IDLES and Love Saves The Day Festival.  We had amazing crowds of smiling happy people, beautiful weather and some jaw-dropping performances from musicians and bands, the pictures and videos from the weekend speak for themselves.   We've certainly all waited a while to be able to put on our shows again and it's been such a great feeling to do so again for all of us, our staff and crew, freelancers, musicians, DJs, security, bar teams and the 1000s of other people who work on the show.  We are already making plans for 2022 which will see us return to the usual date of May/June.  We will be looking to relaunch the Downs Concerts for September 2022 whilst Love Saves moves to a new home.  More information to follow.”

The festival will be running again next year, hopefully in their original home in Eastville Park. More information can be found on their site, and if you’re really keen, you could call the party line early.

Looking for Festivals in Bristol? Our Bristol Festival guide is packed full of everything you'll need to know in order ... 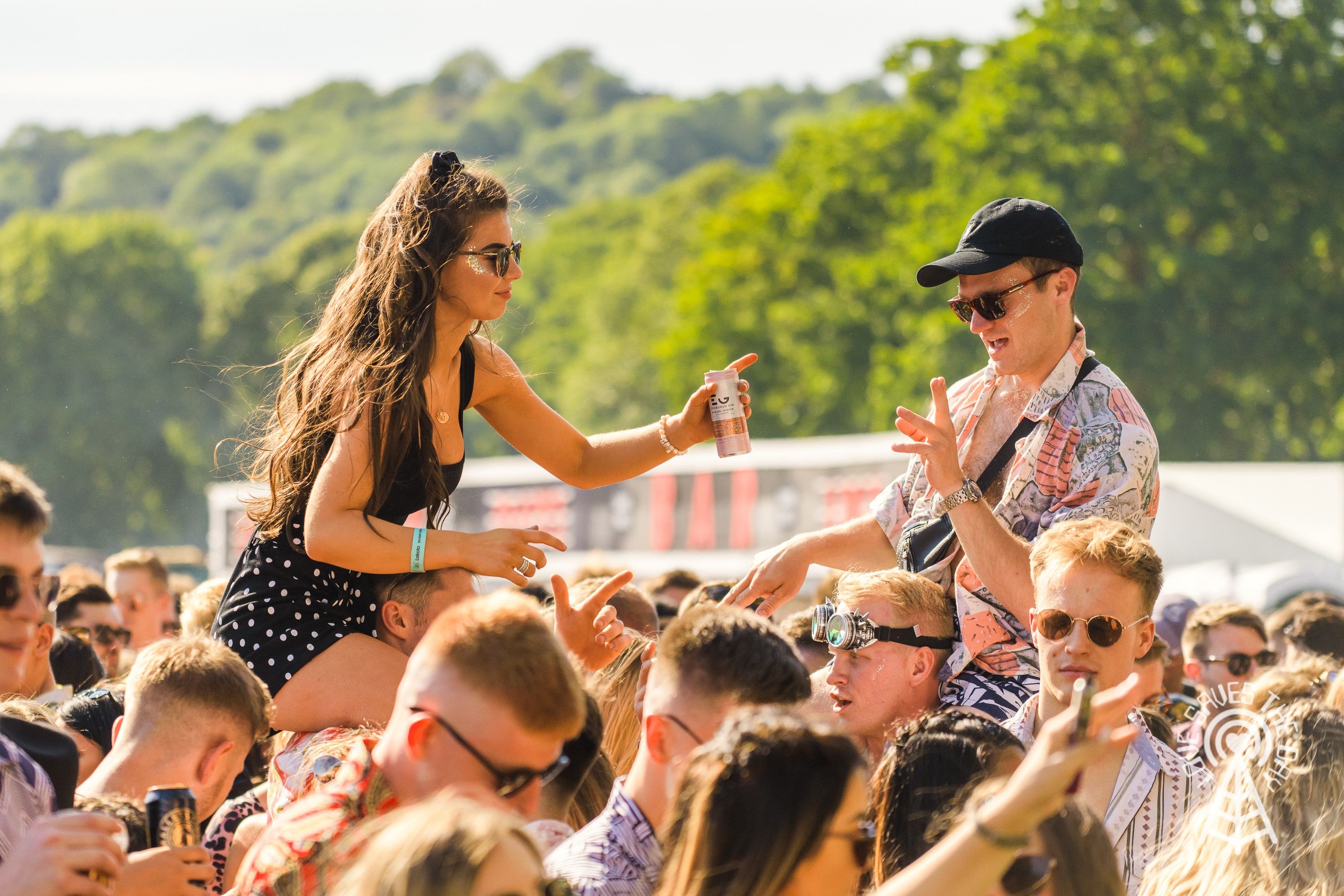 Bristol's biggest music festival is back, welcoming 25,000 per day- Love Saves The Day is moving to Clifton Downs for ...