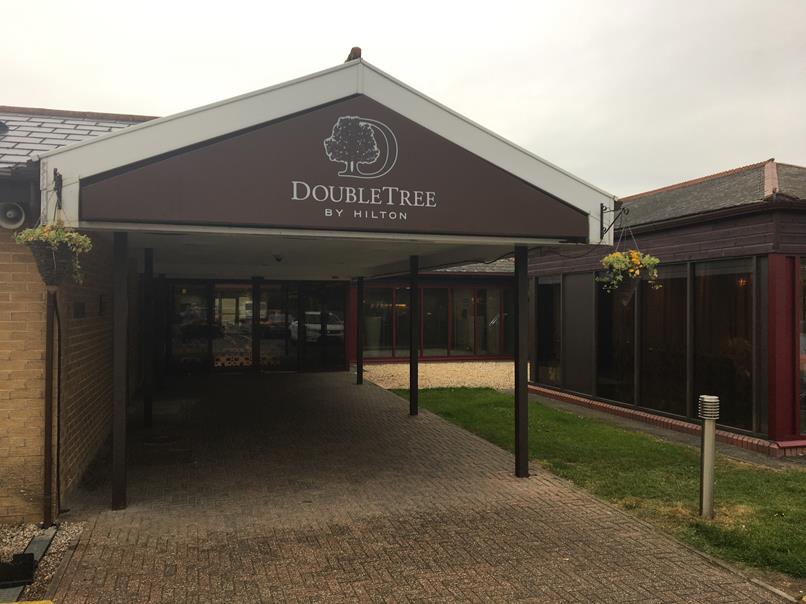 We were recently invited along to recently refurbished DoubleTree by Hilton Bristol North to sample the delights of their Brunel’s Hat Restaurant. Read on below to see how we got on...

As we pulled up outside DoubleTree by Hilton Bristol North, which is located in Bradley Stoke, just north of the city centre, the main thing that struck us was the tranquillity. Something you don’t get in the central hotels and can only be found if you just take a small step outside the main hustle-and-bustle. The Bristol North location is still less than a 20-minute cab ride away from the heart of Bristol, but is just far enough away so you can relax and unwind in more peaceful surroundings.

As we stepped in to the foyer, a broad, open space full of cosy seating and people no doubt coming back from a day enjoying everything Bristol has to offer, we were directed to the right by the reception staff where the entrance to the restaurant was, and the waiting staff were ready to seat us.

After taking our names, we were shown round to our window seat. It was nice to see that the restaurant was also being enjoyed by a few different groups of people; a group with three or four young children, some parents and their grown-up kids, and a few couples. The way the tables are set out means that the chatter adds to the atmosphere, rather than the noise becoming too much. Immediately this doesn’t feel like your typical hotel restaurant, which can tend to feel more like cafeterias.

As we sat down, our waitress took our drinks orders, told us the chef’s special for the day and left us to peruse the menu. The menu was refreshingly extensive and included something for everyone, we had a task to narrow it down to just one dish per course each! As our waitress brought over the ice-cold water and bread rolls (a nice touch) we had to ask for a few more minutes. A decision like this can’t be rushed! 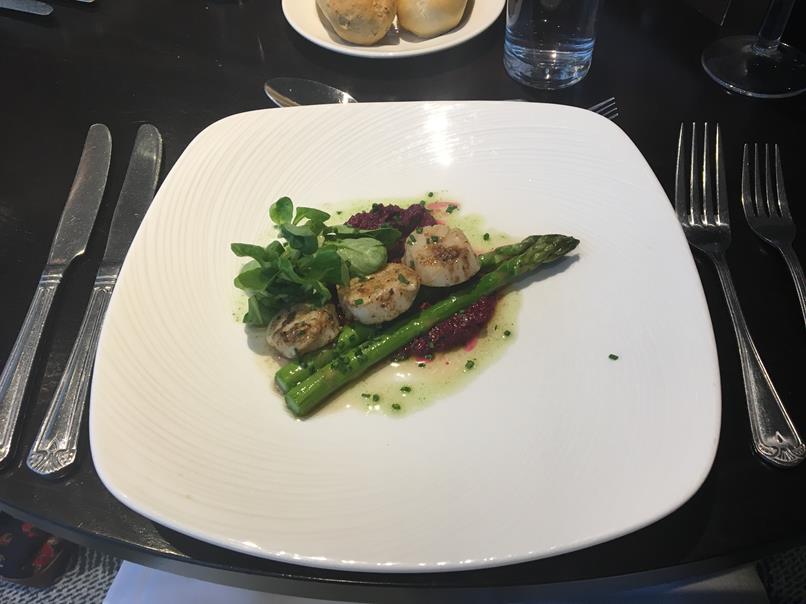 It was only a couple of minutes before we had made our selections. I ordered the Hand Dived Sea Scallops, which came with grilled asparagus, beetroot pesto and pea shoots. The scallops were beautifully cooked, with the moreish taste and texture I love in a well-presented scallop, and the beetroot pesto was a turn up for the books as I previously had an aversion to the vegetable, now I think I’m a convert! A really nice starter which did a great job of warming up my stomach for the main. 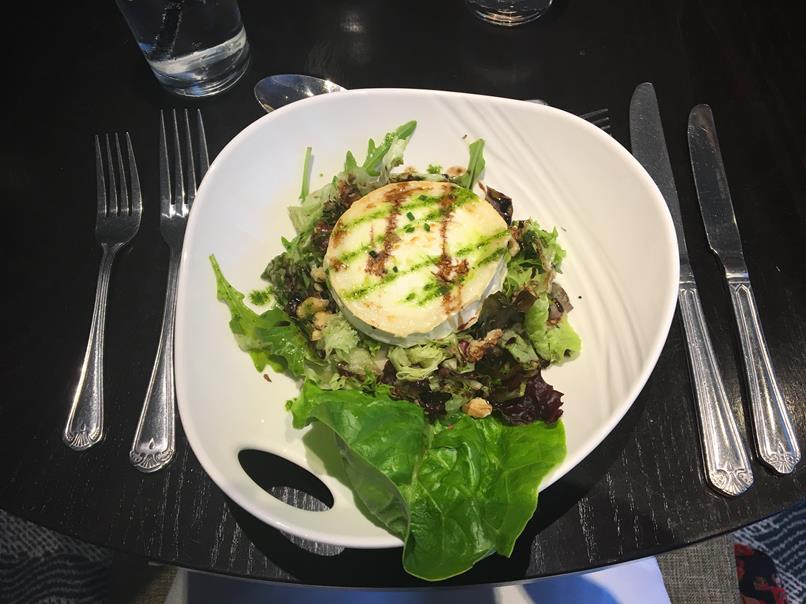 My wife ordered the Warm Goats’ Cheese Salad with roasted walnuts, pear and balsamic glaze. The salad was served with a really generous portion of goats cheese (a pet peeve of my wife) and all in all was a well-balanced dish. As we looked forward to the mains, I ordered a glass of Malbec (a red I’m fond of) to go with my dish. 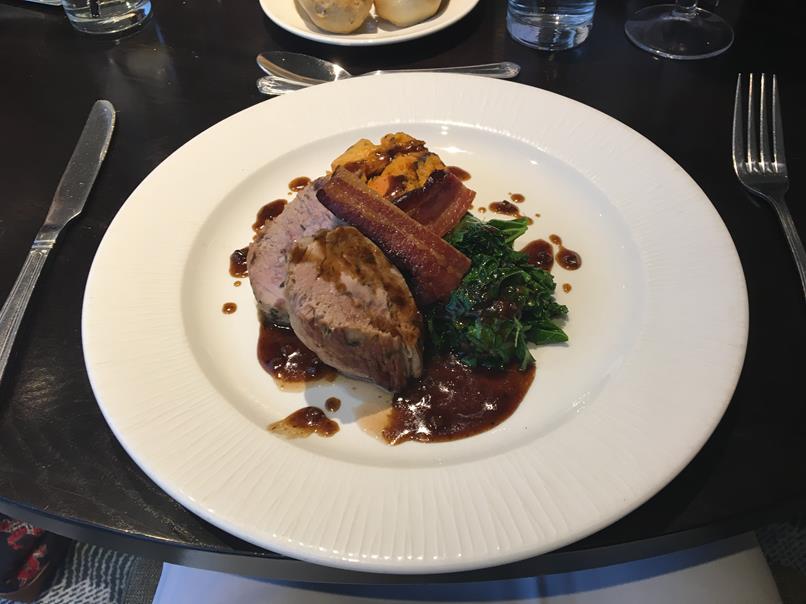 I ordered the Roasted Tenderloin of Pork with sweet potato and roasted garlic hash, wilted kale, crispy pancetta and apple cider jus. Again, this was presented wonderfully and had the taste to match. Pork has the potential to come out a little dry if not cooked carefully, but I’m happy to report that my two cuts were deliciously juicy and the creamy sweet potato and garlic hash was the perfect side. 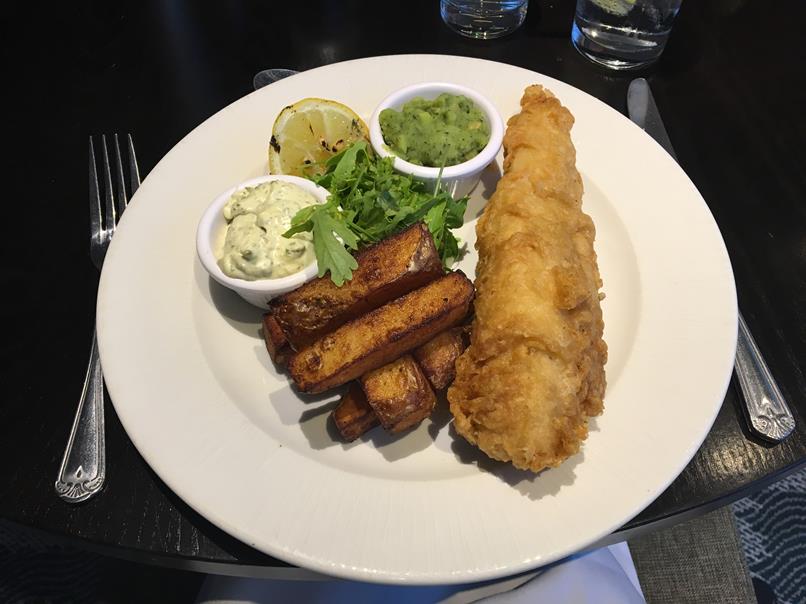 My wife went traditional and decided to go for the brilliantly-titled Oh My Cod! A beer battered fillet of cod, served with minted mushy peas, hand cut chips and tartare sauce. Again, the dish itself was presented immaculately with the chips arranged in what I call “the Jenga position” and the cod itself was flaky, tasty and huge! They certainly know how to provide a lot for your money here. 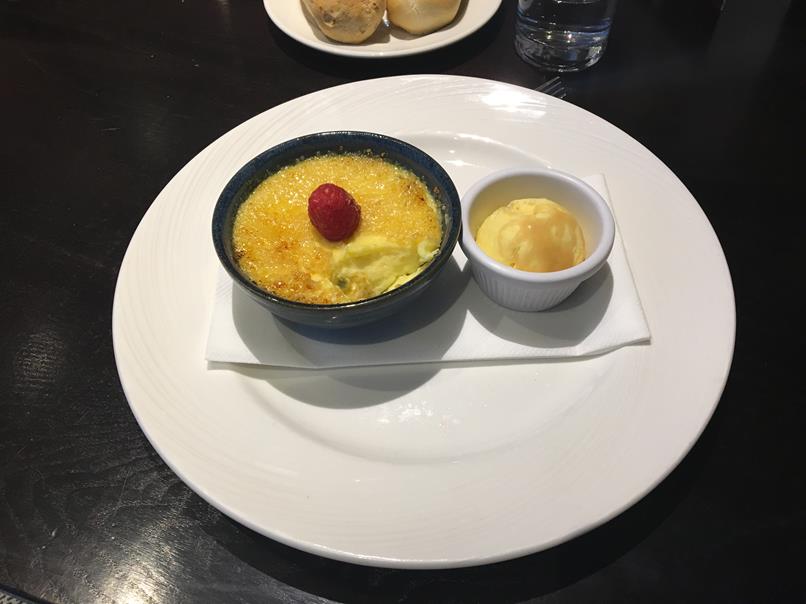 It would have been rude of us not to at least look at the dessert menu, right? Or that Guilty Pleasures menu as DoubleTree call it. We didn’t take a lot of convincing and we quickly ordered our sweets. I opted for the Passionfruit Crème Brûlée, which came served with caramel ice cream. The crunchy, sweet top of the dessert was nicely contrasted to the creamy-goodness hidden underneath, and the ice cream was a great palette cleanser. 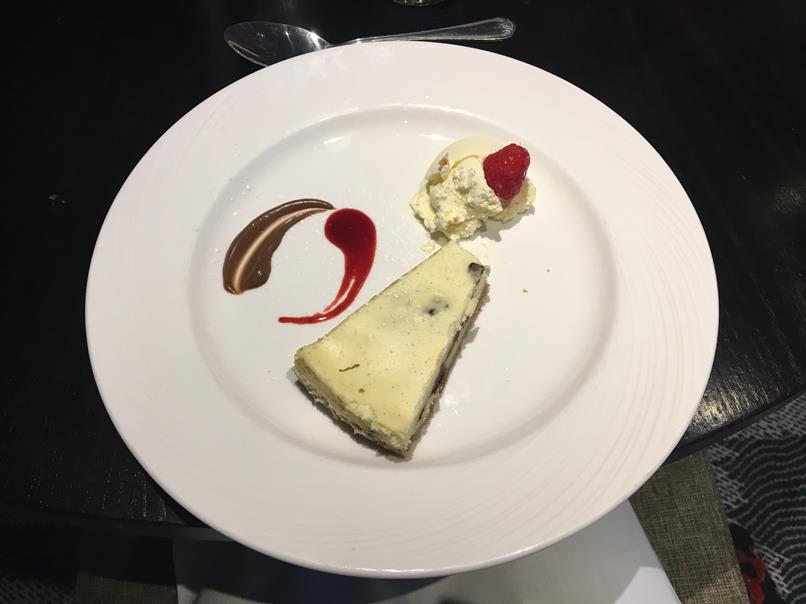 As we were in the DoubleTree – a hotel famous for giving each customer a freshly-baked cookie – my wife thought it’d be wise to order the Signature DoubleTree Cookie Cheesecake. She wasn’t disappointed, as you can tell by the fork-full missing that she ate before I had chance to take a photo! A perfect end to a fantastic meal.

All things considered, we had a fantastic time out at DoubleTree Bristol North. The setting was relaxing, the food was both plentiful and delicious and they also had the other secret ingredient: fantastic service. I spent many years in customer service roles and Maddie, our waitress, was absolutely fantastic. I can’t praise the entire team at the hotel and restaurant enough.

I’ll definitely be coming back, and I highly suggest you book yourself a table very soon!